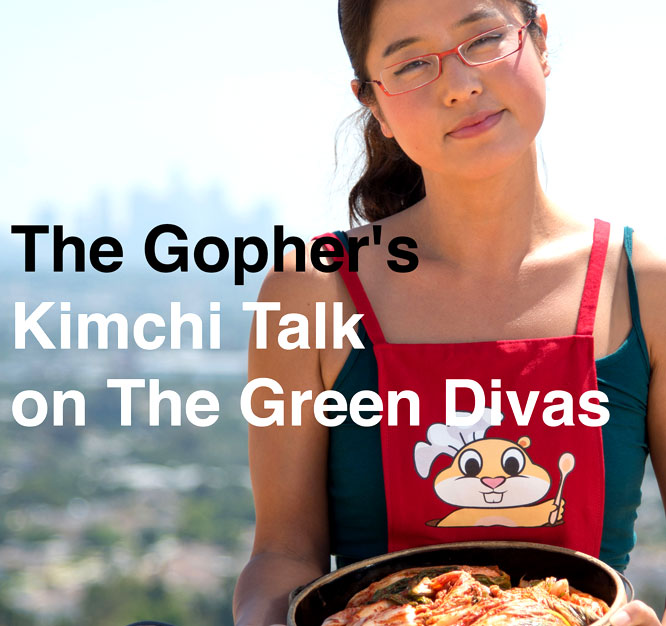 I recently had a pleasure talking about benefits of probiotic foods, kimchi, on The Green Divas Radio Show.

Watch the video above to hear my out of control laughter and my passion for kimchi =).

Probiotic foods are hot items these days. Recently, the importance of probiotic foods have been discussed a lot throughout the media, as well as by respected medical doctors/communities. So what is probiotic? Simply put, probiotic means “For Life”. By definition, it is a microorganism introduced into the body for its beneficial qualities.

Fermentation, which humans have actively utilized for thousands of years to preserve food, is a natural way to introduce probiotics into your body. Lactobacillus bacteria (the beneficial guys) convert sugars into lactic acid, while creating an environment in which bad bacteria cannot grow. This process preserves the vegetables and gives them that delectable tang.

Kimchi is considered to be a global superfood. The American published, Health Magazine, has even ranked kimchi as one of it’s top five healthiest foods.

Let’s look at some of the benefits of kimchi:

According to, Health Magazine, kimchi’s biggest benefit may be in its “healthy bacteria”.

So, what do “healthy bacteria” do in the body?

All of the benefits mentioned above give kimchi the deserving title “superfood”. Though, I, as a food/nature enthusiast, cherish the taste of kimchi above all else. It’s crunchy, and it’s wonderful tangy flavors backed by a depth of umami is what gets me excited! Just as any real Korean does, I eat kimchi at virtually every meal. With every bite, I savor the wonderful taste. I also remind myself that all of living things in kimchi nourish my body and keep my family and I healthy.

Making kimchi might seem intimidating at first. You may ask, what would I know about that? Well, I’ll tell you, I failed the first three times I attempted to make it on my own. Even though I grew up watching my mother and my grandmother making lots of kimchi at home in Korea, I did not get it right. I even helped them along the way to clean the vegetables and peel the garlic since I was little. After I got over my heart-breaking experience of failing, my burning desire to have home-made kimchi became too strong to resist. I decided to consult my mother and then follow a written recipe, which gave me a great result! Since then, I’ve been making in my own California kitchen for over a decade.

Try my kimchi recipes, they are easy to follow and offer step-by-step instructional videos which will guide you through the process. You won’t have to make the same mistakes I did when I started out. I have received many comments and emails from my viewers, excited about their successes their first time out.

I look forward to hearing your ‘Kimchi Success Stories’, soon. ^___^

p.s. I have put together a list of the, “3 Biggest Kimchi Mistakes“, for you. Receive my free gift, by following this link. 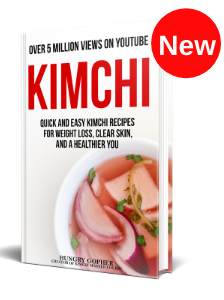